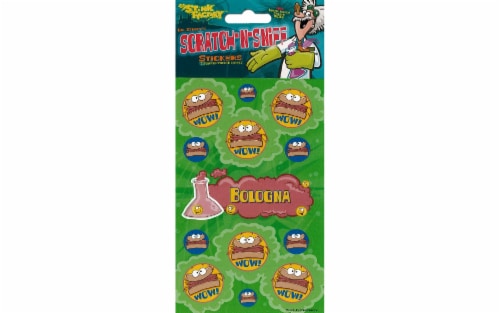 Just For Laughs Sticker Scratch-Sniff Bologna- Two identical sheets with 13 stickers per sheet. 6 stickers have a yellow background with a bologna sandwich and a caption that reads wow! 6 have a blue background and a bologna sandwich, and the largest sticker has a smoking test tube with the caption bologna printed in yellow. All stickers have a scratch-activated scent of bologna. One limited edition secret scent sticker in each package. Try to find all four. Largest sticker measures approximately 3.63"x 1.5".